TALKING ABOUT VAPING WITH YOUNG PEOPLE 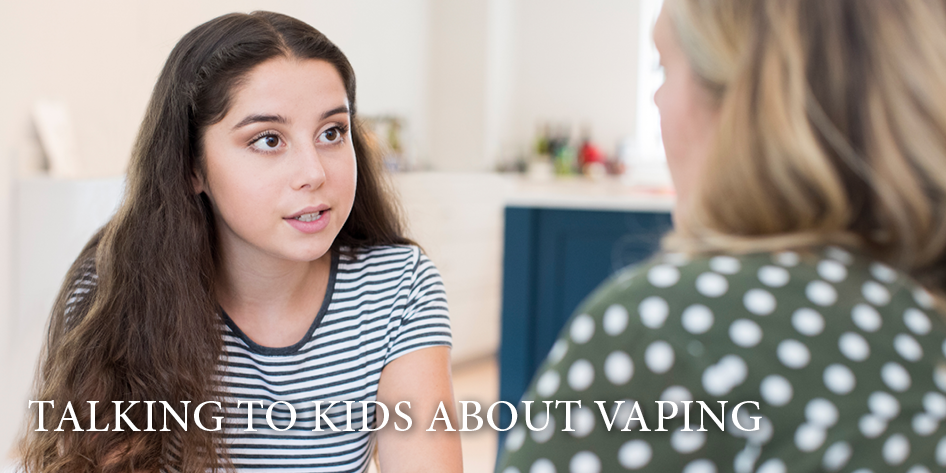 Posted at 06:09h in Blog by Tabitha Corser
Share

Vaping involves the inhalation of vapour created by highly addictive electronic cigarettes (e-cigarettes, vape pens, and other vaping devices). The vapour is produced through the heating of a liquid that typically contains flavourings, chemicals and nicotine. These devices can also be used for other substances such as marijuana and other illegal substances.

WHY ARE YOUNG PEOPLE VAPING?

Recent surveys suggest that there has been a significant increase in vaping amongst young Australians. The Guardian Australia states that e-cigarette use among young Australian non-smokers has quadrupled in 6 years.

Although the advertisement and promotion of vaping devices and products is illegal in Australia, young people often view vaping as an alternative to smoking, or use these devices to quit smoking.

Social media also plays a part in the advertisement of vaping, increasing exposure to e-cigarette to young Australians.

Companies are also attracting young people to vaping through glamorisation of products and by creating flavours that appeal to the younger generation.

Yes, vaping is harmful and addictive.

The Australian Government has stated that e-cigarettes are not considered safe and their research suggests that there is a strong association between the use of e-cigarettes by non-smoking youth and future smoking.

E-cigarettes heat nicotine (extracted from tobacco), flavorings and other chemicals to create an aerosol that you inhale. Regular tobacco cigarettes contain 7,000 chemicals, many of which are toxic. While we don’t know exactly what chemicals are in e-cigarettes, Blaha says “there’s almost no doubt that they expose you to fewer toxic chemicals than traditional cigarettes.”

However, there has also been an outbreak of lung injuries and deaths associated with vaping. As of Jan. 21, 2020, the Centers for Disease Control and Prevention (CDC) confirmed 60 deaths in patients with e-cigarette, or vaping, product use associated lung injury (EVALI).

It is a myth that secondhand vapor is harmless; this couldn’t be further from the truth. The vapor emitted when someone exhales is comprised of many dangerous substances; therefore, vaping should never be conducted around children as this can lead to a number of potential health problems.

If you, or someone you love is thinking about making a positive change and getting help with addiction, then get in touch and find out more about our programs.

The Guardian Australia mentions, “Although marketed as a healthier alternative to traditional cigarettes, e-cigarettes are not harmless and there are significant health risks associated with their use.”

TALKING TO YOUNG PEOPLE ABOUT VAPING.

Do you have concerns about a young person you know that may be vaping?

The Alcohol and Drug Foundation suggest having a conversation with the young individual, but firstly there are a few steps that you should take prior to having the conversation.

Start by getting an understanding of the key facts and have a think about what you might say to the person and some questions you may want to ask.

Try to start the conversation when you are doing an activity together and keep things calm and casual. Also avoid making accusations as this will lead to the person shutting down.

The goal is to have a conversation, not to judge or give the person a lecture. Make sure to listen to their point of view and be mindful of your tone and body language.

Set a positive example for the young person by being vape-free and tobacco-free.

Focus on Their Health

Try to put emphasis on how much you care about the person and let them know that you just want them to be healthy.

You can read more about talking about vaping with young people below – just click on any link:

Hopkins Medicine: What does vaping do to your lungs

Childmind | Teen vaping and what you need to know

Get in touch with our clinic for information on our services and addiction.