UNINTENTIONAL OVERDOSE: WHICH DRUGS ARE THE WORST OFFENDERS? THE RESULTS MAY SURPRISE YOU! 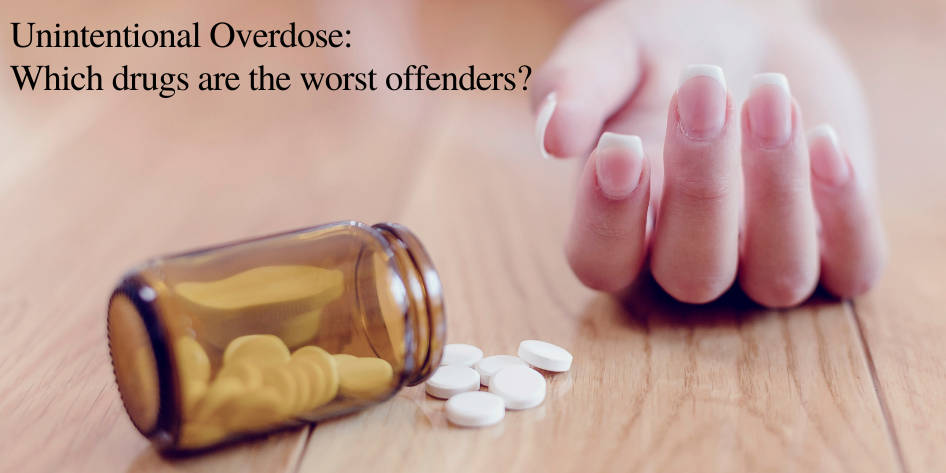 11 Oct UNINTENTIONAL OVERDOSE: WHICH DRUGS ARE THE WORST OFFENDERS? THE RESULTS MAY SURPRISE YOU!

Posted at 05:03h in Blog by Rowelaine Geron
Share

One of the saddest moments I experienced in recent years was witnessing the heartbreaking impact of the death of my son’s best friend due to accidental overdose.  He had suffered with mental health issues, including anxiety, for several years and had consulted with over 7 psychiatrists by the time of his death.  He died after consuming excessive amounts of prescribed pharmaceutical drugs, and a night out drinking with his friends.  He went to sleep and never woke up.

My son’s friend was from a gorgeous loving family.  He had the best private school education and extremely supportive and understanding parents. He was 22 years old.  He is also part of a not-often talked about statistic of the rising rate of accidental overdoses due to pharmaceutical drugs, in particular opioids (pain medications) and benzodiazepines (nervous system depressants usually used to treat anxiety, panic disorders, insomnia, etc).

According to the 2020 Penington Report, more than 2,000 Australians, every year, lose their lives to overdose.  And this statistic has been increasing over the past five years[1].  Men are almost three times more likely to suffer an unintentional drug-induced death accounting for 71.5% of those deaths.

Surprisingly, at 22 years old, my son’s friend was amongst the smallest age group to experience accidental deaths (9.6%).  The statistics show that the fastest growing age group is in fact 40-49 year olds, accounting for 26.9% of all unintentional drug-induced deaths in 2018[2].

There is a tendency for the media to focus on the sensationalism of illicit drugs such as methamphetamines.  Nothing sells news better than the latest illicit drug bust.  However, most overdose deaths occur from poly-drug use, and involve pharmaceutical drugs.

So, what do we do to fix this?  There is no silver bullet, but education on alternatives to medicating our way out of a mental health crisis would be a solid beginning.

It is shockingly surprising how many people are medicated for years on end, without being given real therapeutic advice on how to address their underlying mental health issues.  I work with these people all the time and find it disturbing how many can obtain more information in a single session from us, then years with a medical professional who is supposed to be “treating” their condition.  Anxiety and depression are resolvable mental health issues.  Medicating for years on end is not the answer – it’s merely the band aid – and it’s dangerous.